The Principle of Relativity (in the restricted sense)

Word of the day – Anisotropic – having different values when measured from different directions.
Albert is trying to be as clear as possible, but I don’t get it. Perhaps it is the language of the early 1900s that is perplexing me or I am just plain dumb as a box of rocks. But I am not daunted.

Now if a raven is flying overhead while we are on the train it will have a different uniform translation than if we saw it flying overhead while standing on the ground. I get that, but then Albert has to start in with this math crap —“If a mass m is moving uniformly in a straight line with respect to a co-ordinate system K, then it will also be moving uniformly and in a straight line relative to a second co-ordinate system K1, provided that the latter is executing a uniform translatory motion with respect to K”. What happened to the raven??

So Albert’s brilliant principle of relativity (in the restricted sense) is –If the raven maintains a uniform translation it will follow the same general laws as the train in relation to the guy on the ground.  I thought we already kind of knew that.

Oh crap – there is a BUT. But in view of the recent development in electodynamics and optics things might be more difficult - of course.
If a man (w) is walking inside a train car (v) (in the same direction as the train car) his distance (W) traveled is the combination of his walking (w) and the train’s movement(v)
W = v + w

Then we have the speed of light – 300,000km per second in a vacuum – and this, Albert says threw physicists into a tizzy. Because if light (c) is moving through a train car (v) instead of a man it is now W = c- v. It is subtracted. It is not the same equation and that screwed things up. But I’m not sure why? Is it because the light is so fast that the train in essence traps it and slows it down? Like catching a flying hummingbird in a net. Okay. I’m good with that. However – since these two equations don’t fit, one of the founding theories was thought to be flawed - It couldn’t be relativity, no, not Albert’s brilliant idea. Perhaps it is the idea of the constant speed of light.. No. That can’t be it either. Some other guys proved that. So – we need another theory to explain the inconsistency.
At this point my book exploded – literally. 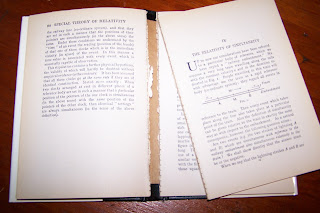 I guess I’ve been too rough on Albert.
Posted by Peggy T at 9:17 AM

Labels: Einstein, The Theory of Relativity