More musings on Albert Einstein's Relativity, the Special and the General Theory, A Clear Explanation That Anyone Can Understand.

Chapter VI – The Theorem of the Addition of Velocities Employed in Classical Mechanics.
This chapter I get! But it isn’t worth repeating because at the very end Albert says, “the law that we have just written down does not hold in reality. For the time being , however, we shall assume its correctness.” I don’t want to ASSUME correctness if it isn’t correct. I’d rather just be told what is right..
Chapter VII - The Apparent Incompatibility of the Law of Propagation of Light with the Principle of Relativity. OR – why you should never assume!
I won’t bore you with more of the train and the man or the raven, so basically – light does not follow the above law so therefore the law is not correct.

I may be dim, but it is slowly dawning on me that my biggest mistake is trying to learn the theory of relativity as if I were a person born before it was invented. So, I back tracked a bit and sought out more help – The Einstein Theory of Relativity: A Trip to the Fourth Dimension. by Lillian R. Lieber. This book, published in 1936! (much more recent) was reprinted a dozen times ( and probably more since my copy is the 12th edition) It is dedicated to Franklin Delano Roosevelt “who saved the world from those forces of evil which sought to destroy Art and Science and the very Dignity of Man.”
Oh - and by the way -- you may be asking yourself why I am using such old texts.  Well, as a nonfiction writer, I am trying to use primary sources, or get as close as I can.  So there!!! No googling, youtubing for me!

Lililian's preface promises to use just enough math to HELP and NOT HINDER the lay reader (Lillian used the caps, not me). It is also written in what seems to be free verse!?!? So bear with me, or is it bare with me, ‘cause I feel so naked revealing how stupid I am? Anyway – Lil says that I have to understand what was going on in Physics that brought about Albert’s theory. What was the “ maladjustment producing a tension which ultimately causes a break, followed by a greater stability – at least for the time being.”
Physicists were trying to prove and measure the ether, what they assumed occupied all of space. They assumed that the earth traveled through the ether and therefore there should be an ether wind. No one could find it. They all thought the experiments  were flawed.

Enter Einstein. Albert, being the cocky guy that he was, chose to assume that the experiments were right and the problem was trying to find the law that supported what was observed. He thought out of the box. He re-examined the foundation of physics and proposed a few changes, which seemed to make everything work. Then Lil reviews one of the experiments that wasn’t working and what burns my butt is when she says, “any boy who has studied elementary algebra” can figure this out. Never mind the chauvinist comment, I can’t figure this out! This time it’s a kid trying to swim across a river. Get a boat and don’t bug me! And this is just one of the problems that didn’t work.

Oh, and did I mention the helpful illustrations by Hugh Gray Lieber? 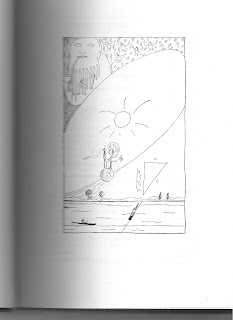 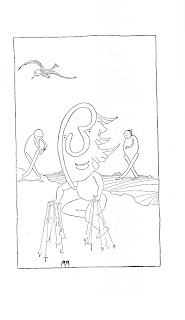 Physicists are on crack! At least Lil and Hugh are.
Posted by Peggy T at 6:44 AM