Recently, Scholastic pulled the picture book A Birthday Cake for George Washington because of the way slaves were portrayed.  I have not seen the book, nor do I know if it was fiction or nonfiction. But I hope this incident opens up a discussion.  Should difficult subjects be dealt with in picture books, and if so, how?

When my book Farmer George Plants a Nation came out it received good, even starred reviews. But one reviewer criticized an illustration because a slave was smiling. I know that I did not intend to portray slavery in a "happy" way, and I know that the illustrator, Layne Johnson, didn't either.  Our goal was accuracy. The book wasn't even about slavery. The fact that I was writing about Washington's farm meant that I had to address slavery, and illustrations would include enslaved workers.  I chose to address slavery in the back matter because including it in the narrative would have shifted the story away from my intended focus. And we all know that a picture book has to have a tight focus. I didn't mean to slight the issue, and I hope it isn't perceived that way. Was I right to do that? I don't know. It was a judgement call on my part.

Now that I look at the book, I see that there are actually three smiles. Two black women are talking to each other and one is smiling. That seems okay. On another page, a man is behind a plow and smiling at the back end of the mules in front of him. I think that is okay, too. The only questionable smile appears on the man pulling a handcart. He is looking in George's direction, and  George appears to be smiling back (although now that I look at it, he looks rather smug... or wistful... yeah, we'll go with wistful).  Is it wrong to have a slave smile in the direction of the master? Would it ever have happened? I think one questionable smile out of the 28 other black figures that I counted in the book isn't bad. 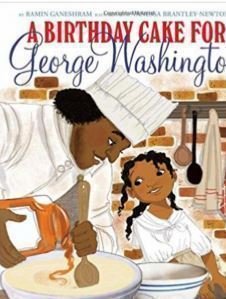 A smile is one thing, but what about invisibility? Is that any better?  The other black figures in the book have their heads lowered, or shaded by a hat brim, or have a neutral face, or are so far in the distance that they are indistinct. Blurred. They are the cultural back drop. That's accurate, but is it really better than a prominent slave (yes there were slaves with higher standing) participating in the forefront?

My book about Thomas Jefferson doesn't have a single image of a slave, nor are they mentioned in the text, but because of TJ's baggage I felt obliged to address the issue in the back matter there, too (More to appease critics than educate young readers, if I'm being honest).

I have always admired the monumental work that a nonfiction illustrator does. I just have to write, "He guided a plow." The illustrator has to figure out what that plow looked like, what the men or women would look like, what they would wear, what the landscape would be, the types of plants.... The list of all the things that could go wrong is endless. So I am grateful to Layne Johnson for his sensitivity and attention to detail.

All I know is that slavery is a difficult subject to write about when it's the main topic. It is also difficult to address when it is the cultural backdrop of a smaller story. Should we not tell those stories? Or should we come to some understanding of how we as authors and illustrators can walk that fine line of educate and entertain?

My heart goes out to the author, illustrator, editor and art director on the project. They walked the fine line, and unfortunately for this project,... they fell off.