New Year - New Experiences -- Down on the Farm


The best part about being a writer is that it gives me an excuse to do whatever the heck I want to do. That includes taking off shortly after the holidays to spend four days "Down on the Farm."

When Julia Recko from the American Farm Bureau Foundation for Agriculture (AFBFA) asked if I wanted to spend a long weekend getting to know a bunch of farmers, I said. "Of course I do!" I didn't have any immediate plans to write about farmers, but sometimes research opportunities come to you, and when it does, grab it.

I was a little suspicious that I was flying down to Orlando, land of Disney, rather than Iowa or Kansas, but it turns out that a short drive away from Cinderella's castle are some of the most beautiful cattle ranches in the country. (And a large percentage of farmers were there for the AFBFA convention.) 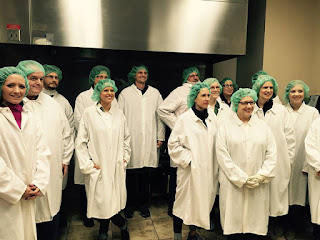 I wasn't the only one to jump at this opportunity. Eleven other children's authors and illustrators were there: Albert Monreal Quihuis  Loreen Leedy, Sandra Neil Wallace,  Susan Grigsby, Eric Ode, Lela Nargi, Lisl Detlefsen, Lizzy Rockwell, Michael Spradlin, Shennen Bersani, and 2009 Miss America Katie Irk.  The first day we toured a meat processing plant (not a slaughterhouse!). Other than the freezing temperatures and hairnet it was like touring any other processing plant. Highly efficient and organized, beef was trimmed to chef's orders at a rapid rate. I was struck by how many people worked there even though it was partially mechanized. No machine can take the place of a real person making sure each filet is measured properly. 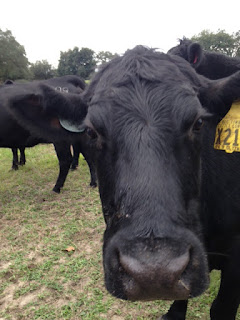 That afternoon we toured a family-owned cattle ranch. The black Angus trotted after our hay wagon eager to get a snack.  Several week-old calves shyly peeked around their moms to see what the fuss was about. Although I could have stood in the pasture for hours watching the animals, the real stars of the show were Riley and Reagan Rowe, the farmer's granddaughters, who were proud to show off their 4H projects. At 14 and 9, these two girls were more poised and well spoken than most adults. And they knew there stuff. I had no idea 4H kids had to keep such careful records of expenses, depreciation of equipment, and send letters to potential buyers. Sounds similar to what we have to do as writers!

The next day we were set up on a "blind date" of sorts with a farmer.  I was very nervous when I met Carlton, a farmer from Iowa. He lives on a Heritage Farm that has been in his family more than 100 years. He and his wife grow corn, soybeans, and finish cattle, which means they buy calves and fatten them up for market. We talked about new technology and why people are so suspicious of innovation in farming. Did you know that by the year 2050 that the world population will be 9 billion people? Yet, the world's farmland is decreasing. That concerns Carlton and other farmers. When I asked him if he thought about the weighty fact that he was responsible for feeding the world, he said yes, he does think about it. I was humbled. I just write children's books.

I didn't have any plans to write about farmers before, but now? Who knows. I have a notebook full of ideas. And I'm curious to know more. That's what happens when you put yourself out there. It makes you think. So take a leap. Take a trip. Talk to people. You'll be a better writer, and a better person, for it.