Barb Rosenstock is the author of the picture book biography, Fearless, The Story of Racing Legend Louise Smith (Illustrated by Scott Dawson, Dutton, 2010). Louise Smith was the first woman elected to the International Motorsports Hall of Fame, 43 years after her last race. Long before NASCAR and the Daytona 500 she was flying around dusty tracks and living her dream. When other women played by the rules, Louise was breaking them.
Barb Rosenstock’s biography is told with the same 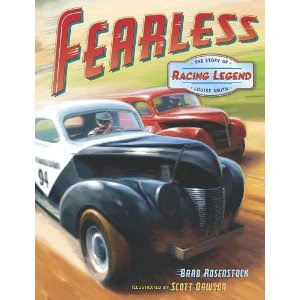 energy and fearlessness that Louise must have had. The reader never doubts that her perseverance will pay off. this book isn’t just for racing fans. Everyone can appreciate Louise’s chutzpah and her husband’s as well. At a time when men were men and women were housewives, he agreed to help his wife be a stock car racer.
The illustrations by Scott Dawson are bold, rich and reflect the heady racing life of the 40s and 50s.
As a writer who is long-winded, I especially appreciate Barb’s ability to hone this biography to its essence, and I’m sure you will too. Learn how Barb discovered Louise and how Fearless came to be.
PT: There are so many great stories out there about strong women. What was it about Louise’s story that inspired you the most?
Barb:  As women we’re often taught to consider others’ opinions and feelings over our own. Even as a young girl, Louise had the guts to follow her own heart first.
PT:  You succeeded in finding that all important single thread that runs through Louise’s story – her desire to go fast, faster, flying, free. Did that come quickly to you? Describe your process?
Barb: I kept feeling that the narrative needed a phrase to move it along while reading aloud. The word 'fast' was the most obvious choice and the rest took about ten minutes. It was harder to find the right places in the story to use the phrase than it was to write it!

PT: You mentioned in the back matter that “sometimes legends can be hard to prove.” What did you mean by that and how did you decide what to put in the book and what to leave out?
Barb: Louise Smith is not well known and I didn’t have the luxury of shelves full of material to use as resources. Most of the stories are from interviews with racing fans or other drivers from that time, and occasionally there were conflicting versions of the same story. When people agreed, some stories tended to take on some of the overblown characteristics of tall tales--I could not always absolutely prove that a story happened using news accounts or historical photos, the “feedbags flapping on the windshield” for example. I left out any material that wasn’t appropriate for children and anything that didn’t serve the theme of speed or characterize Louise’s spirit. I do love picture book biographies because of the challenge of putting forth that complete sense of a life in such an intimate space.
PT:  Are you a neat-n-tidy researcher or a file-by-the-pile person? How did you keep yourself organized throughout the writing of the book?
Barb: I grew up in a house where my mother labeled everything, then spent 8 years in Catholic school where neatness counted most! When I worked in advertising, my colleagues in the creative department teased that my desk was so clean it looked like I quit at the end of every day. I file, I sort, I keep notes. There are about 15 files of research for the 32 pages in FEARLESS. Sometimes I have to fight to stop organizing and start creating.
PT: When did you first learn about Louise Smith? What was the timeline from idea to publication?
Barb: I learned about Louise in one of the more boring places on earth--while waiting in a dentist’s office. Her obituary was in a spring issue of TIME in 2006. I was fascinated to learn that women raced stock cars before the 1970s, plus I think I fell in love with the photo of this little old woman waving a checkered flag. I researched through that year and into the next. The contract was signed in 2008, the book came out October, 2010.
PT: What was the greatest challenge during that time?

Barb: I knew (and still know) next to nothing about auto racing compared to experts and hard-core fans. Writing this story meant attending events where EVERYONE in the room, from 10 year olds to 90 year olds, knew more about the subject of auto racing than I did. It meant not being afraid to sound stupid, and I thank the racing legends community for its patience. I remember being nervous before attending a racing awards ceremony alone to interview some of Louise’s friends and colleagues…I told myself that if this woman was brave enough to drive 100 miles an hour in a beat up car with men trying to bash her off the track, I could be brave enough to chase her story at a cocktail party!
PT: Did you learn something about the process that you hadn’t known before? Is there something that you would do differently?
Barb: If anything I would have interviewed more folks, tracked down more of Louise’s family and read more racing news, though there was only so much about Louise out there. The problem with research is that it can be never ending. At some point you have enough to make a picture book, so you stop and write. I would write parts of any book differently. I’m a wildly obsessive reviser…there are always words, sentences, scenes that I would alter. The only thing that makes me stop changing a story is publishing it.

PT: What can your readers look forward to next?


Barb: My second picture book, a fable called The Littlest Mountain, came out this year from KarBen. Up next is a picture book from Dial titled The Camping Trip that Changed America, illustrated by Caldecott winner Mordicai Gerstein (what luck!) This tells the based-in-truth story of President Theodore Roosevelt and environmentalist John Muir who take a camping trip and save America’s trees. There are a few more upcoming books in various stages of the publishing process and if my dreams come true, many more to come. Visit my website at www.barbrosenstock.com for more information on new titles.
http://www.barbrosenstock.com/
Thanks Barb!
Posted by Peggy T at 5:00 AM