Nonfiction in Verse: An Interview with Susannah Buhrman-Deever 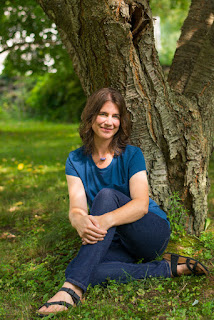 I'm celebrating Poetry Month with Susannah Buhrman-Deever and her debut book, Predator and Prey, A Conversation in Verse. Beautifully illustrated by Bert Kitchen, this nonfiction picture book captures the dangerous dance of survival, and the way animals communicate in that moment.

Recently, Susannah was gracious enough to answer my many questions. Here's what she had to say about her work and her process:


1. Were you always a poet? What kinds of things did you write as a child?

I don't know that I can call myself a poet, but I do enjoy writing it. I like fiddling around with words, so writing a poem is a very fun (though at times frustrating(!)) challenge. Poetry has always been one of my favorite things to read. Shel Silverstein was an early favorite, and The Ox-Cart Man, which will forever and always be my favorite book, is really a book-length poem. I did write some (terrible) poems growing up, but mostly, I read poems and soaked them in. 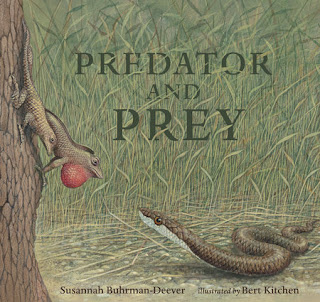 2. How did the idea of a “conversation in verse” come about?

The idea of exploring how predators and prey interact had been bubbling around in my head for a while. Specifically, I was thinking about how sometimes prey actually talk to their predators, even though at first glance that might seem to be a strange thing to do. The "conversation in verse" format came to me while on a walk in the woods. A beginning line for a poem in the voice of a chickadee popped in my head, and what a hawk would "say" in reply. I had recently read Paul Fleischman's Joyful Noise: Poems for Two Voices, and the idea of a poetry conversation between two animals seemed like an interesting way to explore predator-prey dynamics.


3. As a trained biologist, how did it feel transforming scientific knowledge into a poetic form? And how important was it to include the prose sidebars?


One of the things I really wanted to be conscious of when writing the poems was to maintain accuracy, even when taking on the "voice" of different animals. It was important that any imagery I used was based in fact. Including both the poems and the prose sidebars was a way for me tell the same story in different ways, hopefully helping my readers better understand what was going on.


4. How did you choose the combatants? And what was it like trying to capture each animal’s “voice.”

Because of my background studying animal behavior, I already knew of a few cases where prey told predators the truth, or predators tricked their prey. Where I could, I wanted to find a examples of predators and prey using the same strategy (for example: a predator "listening in" on its prey to help it hunt, and a prey "listening in" on its predator to avoid being attacked). So I dug into the scientific literature to find more examples I could use.

Capturing each animal's "voice" was the fun part. I played around a lot with using different words and rhythms to get different effects for each "character." It took a lot of exploration and revision before I felt I got a good "voice" for each poem.


5. Did some poems take longer than others, and why?

I worked on the poems on and off for about two years. Some came quickly; others took much longer. Even though it's the shortest poem in the book, it took me over a year to get "PSST-HIDE!" into its final form. Previous versions were way too long, especially because the chickadee call the poem is describing is so short. Sometimes I have to let things sit for a while before the right idea strikes.


6. Which authors did you study while you were working on this project? And what did you learn?

Joyce Sidman's natural history poetry collections (such as Song of the Water Boatman and Winter Bees and Other Poems of the Cold) completely floored me when I first found them. I am in awe of her talent. Seeing her work opened up the possibility to me of using poetry and sidebars to explore nonfiction topics.


7. Is your next project also in verse? And can you tell us what it is?

My next project is a nonfiction picture book (If You Take Away the Otter, illustrated by Matthew Trueman) and is due out next year from Candlewick. That book actually started out as a poem, but eventually became prose. In the meantime, I'm working on researching and drafting some more nature based poetry ideas, because, well, it's something I love to do.