Hot off the Press! Thomas Jefferson Grows a Nation 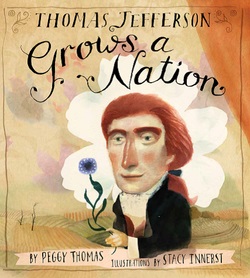 Ok, so PR is not my forte. Thomas Jefferson Grows a Nation was released yesterday to no fanfare at all, because I wasn't paying attention. Sorry TJ.  But in my defense, the book had an amazing early reveal back in June at the Ag in the Classroom National Conference, so it's felt like it's already been on the market even though technically it wasn't supposed to be. But back to the book --

Although TJ was the obvious sequel to Farmer George, the two stories are quite different. While George labored at Mount Vernon, TJ's agricultural interests took him to France and Italy. While George's efforts concerned the average farmer on a small scale- composting, plowing, and harvesting - TJ advocated for farming on a much broader platform.  He was concerned with America's reputation, its ability to take part in a global economy, and of course remain ever independent. Sounds serious. But the way he went about protecting and promoting all things American will, I think, endear him to readers.

Check out Thomas Jefferson Grows a Nation through an independent bookstore near you!!


"It is no small feat to choose but a few facts about such a well-documented life; the choices made and the method of telling are both exemplary. KIRKUS REVIEW
Posted by Peggy T at 4:32 AM