This Blog is For The Birds

The second best moment of being a writer (first is making the sale) is opening the box to reveal for the first time the book that you have labored over for years. That moment happened last week when I came home to find an unexpected box sitting on the kitchen table. Before I even took off my coat or put the groceries away, I grabbed a scissors and sliced the box open. My book, For the Birds: The Life of Roger Tory Peterson, was finally here! 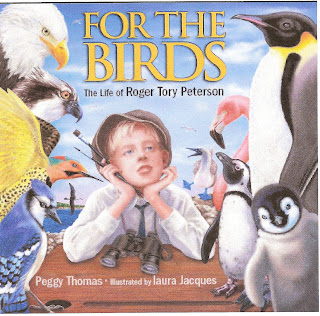 I am proud to say that it is absolutely beautiful! Award-winning illustrator Laura Jacques captured young Roger's enthusiasm, sharp blue eyes, and thatch of blonde hair as beautifully as she paints the feathers of a flying flicker. And after immersing myself in Roger's story, it still inspires me. Roger grew up in Jamestown, New York where he spent every spare minute out in the fields with binoculars or camera and taught himself how to identify birds on the wing at a time when even trained ornithologists had to shoot the birds before identification. Roger was also a natural artist, sketching birds in the margins of his text books, and later going to art school in New York City. At the naive age of 23 years old, Roger created a little bird identification field guide that, in the middle of the Depression, sold out in weeks and turned a nation on to bird-watching. He became a world reknowned naturalist and leader in the conservation movement. 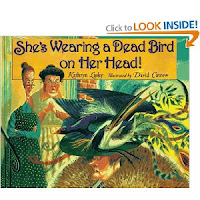 Holding this book, I hope it will follow in the footsteps of other amazing bird books like Kathryn Lasky's picture book, She's Wearing a Dead Bird on Her Head! (Hyperion, 1995) about Minna Hall and Harriet Hemenway who created the Massachusetts Audubon Society to protect birds from the millinery industry. I love David Catrow's quirky illustrations of Minna's steely scowl and Harriet's pinched indignation as they pushed for legislation and education about endangered bird species. 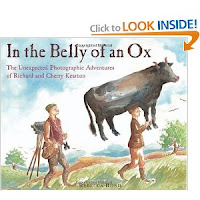 Rebecca Bond wrote and illustrated the story of Richard and Cherry Kearton in her picture book, In the Belly of an Ox: The Unexpected Photographic Adventures of Richard and Cherry Kearton. The brothers were nature photographers who created the first photographic bird book, and the way they did it is mind boggling. When you look at Bond’s illustrations, you may not believe it, but her illustrations reflect accurately how they teetered on top of a ladder placed on a high tree branch to photograph a nest, and of course, how they used the hide of an ox as a ‘living blind’ so they could get as close as possible to shy species.
The history of the conservation movement and natural history studies is filled with fascinating characters, and now that For The Birds has landed, I can turn my attention to poking around for yet another great story that might inspire a new generation of readers and conservationists in the future.
Posted by Peggy T at 4:00 AM