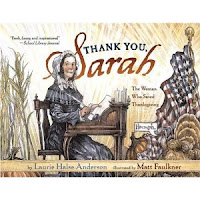 One hundred and fifty-eight years ago today, Abraham Lincoln declared the 4th Thursday of November to be a National Holiday of Thanksgiving. It wasn't his big idea, but that of Sarah Joshepha Hale's and you can read about it in Thank You, Sarah: The Woman Who Saved Thanksgiving (Simon & Schuster, 2002) written by Laurie Halse Anderson and illustrated by Matt Faulkner.  This 40 page picture book celebrates Hale's 38 year letter writing campaign for a national holiday of Thanksgiving with humor and historic accuracy.  Faulkner's caricatures show Sarah and other ladies storming the State House doors with a quill pen battering ram, and Presidents Taylor and Fillmore passing the buck to Pierce before Lincoln got a hold of it. It is a perfect book to show kids that perseverance pays off.
﻿ ﻿
I appreciate Sarah's story, too, because she was not just a Thanksgiving fanatic, but a writer who became the editor of the first American woman's magazine.  In 1822, when her husband died, she found herself having to support her family of five children.  She wrote and sold a book of poetry, then wrote stories for popular periodicals.  In 1828 she was asked to edit Ladies Magazine which turned into Godey's Lady's Book, the leading woman's mag for 40 years.
Although she claimed not to be political and was against women suffrage, she promoted property rights for women, education and woman's health.  But more importantly, she led by example and reminded everyone that a woman with a pen can do anything!