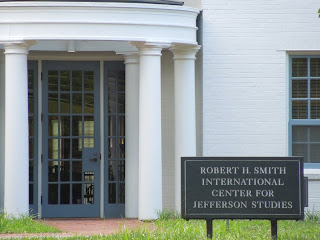 I spent two days at the Thomas Jefferson library near Monticello cruising through the bound transcripts of his Papers, and browsing the stacks.  Although primary sources are the gold standard, I find equally precious gems in secondary sources. Gasp! Did I really say that? Yes, I did, and here’s why.
Unless you are a veteran scholar of TJ and have spent your career steeped in his work, then you need some guidance to the immense amount of writing the man left behind. Jefferson wrote some 18,000 letters (compared to his contemporaries who wrote about 5000), and then there are the letters he received, political missives, declarations, summaries, essays, financial memorandum, travel journals, daily notations in a farm book, garden book, and  meteorological data covering more than 60 years. That’s a lot of stuff to plow through.  Thankfully scholars have done much of the shoveling for you. Some clear a better path than others, and that’s where a great librarian is invaluable showing you who to trust and what to steer clear of.  Anna Berkes at the TJ library is one of those librarians. 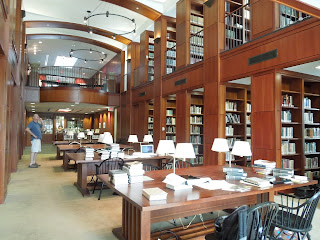 Besides the sheer volume of Jefferson’s legacy, you also need help understanding what he and others of his time meant.  The overly polite courtesies of 18th century letter writing can be tedious to slog through. Several times I found myself thinking, “Get on with it, already.”  On the other hand they were conscientious enough to future readers to note which letters they were referring to. They had to – after all, letters took days and weeks to reach their destination.
It's harder to 'get' 18 th century sarcasm.  When were they being snarky? When were they joking?  Thomas and one of his college buddies often wrote letters of their great adventures trying to top the other one. So, some of the adventures TJ wrote about never happened.  How would I know that if Kevin Hayes, author of Road to Monticello, hadn’t told me?


So, thank you Anna and Jack at the Thomas Jefferson Library for locating documents for me, and thank you to Betts, Boyd, Padover, Hatch, Peterson,  Meacham, Hayes, Thomson, Wulf, Dugatkin, and all the writers who have come before me who are helping me understand one of the most amazing men in history.

Just thought I'd pass along this article on NPR on "How to Get Kids Hooked on Nonfiction Books this Summer. Holly Korbey interviewed founder of iNK Think Tank Vicki Cobb. She included a reading list too. Check it out.
http://blogs.kqed.org/mindshift/2013/07/how-to-get-kids-hooked-on-nonfiction-books-this-summer/
Posted by Peggy T at 6:06 PM No comments:

Evelyn B. Christensen has a new online issue of Writing For Children's Magazines.
It includes an article by Savannah Hendricks - How Rejections Can Improve Your Writing
and an Overview of Clubhouse magazine by Carrie Clickard.
Check it out. Evelyn provides a great resource.

One of the big take-away tips from the 21st Century Children's Nonfiction Conference was -- get media savy!  When Roxie Munro said she spends two hours a day dealing with her online presence I cringed. But I've challenged myself to be better about this stuff than I have been.  I know it's one of my weaknesses along with procrastination, popcorn and napping.

So, today I will update  my website. It really needs tear down and rebuild, but I'll start with making sure my calendar is up-to-date.

Another thing Roxie mentioned was joining things like Good Reads.  And then today I read a blog by Sarah Pinneo about an Author's Complete Guide to Using Good Reads, so I thought I'd share it. It was on Query Tracker.