This Saturday, I had a lovely time at the Albany Children’s Book Festival at the Albany Girl's Academy.  I shared a table with Jana Laiz, author of Elephants of the Tsunami, a true story about elephants who saved many people who otherwise would have been washed away; and “A

Free Woman on God’s Earth,” the inspiring story of  Elizabeth “Mumbet” Freeman who sued for her freedom in a Massachusetts court of law. We swapped stories of Thailand and elephants, in between signing books.

The crowd wasn't as large as it could have been. The 70 degree weather enticed many folks to garden -- which is what I would have been doing -- shoot hoops, play T-ball, or a hundred other things we've been buggy to do since the snow melted. But that gave me time to roam around and meet other writers. I was amazed at how many nonfiction books were there. Maybe it was a conscious decision by the festival board, or maybe nonfiction writers are just braver to step out into the spotlight. I know that several years ago I was usually one of three or four nonfiction writers at a book festival, but this weekend it seemed like every other table celebrated a NF title.

I met Matt Faulkner, author/illustrator of A Taste of Colored Water. Although not a NF book, Matt has illustrated some award winners like You’re on Your Way, Teddy Roosevelt by Judith St. George. But I love A Taste of Colored Water because it looks at the Civil Rights movement from the POV of two innocent, rural white kids who come to town to see this magical rainbow bubbler they've heard about, only to be confronted with the reality of intolerance. It makes you think, which in this day and age we need to do. 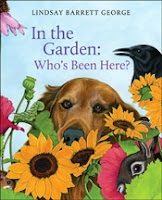 I also met author/illustrator Lindsay Barrett George, who created In the Woods: Who’s Been Here?, a book that my kids loved when they were younger. I purchased In the Garden: Who’s Been Here? for two more curious kids, Ryder and River. 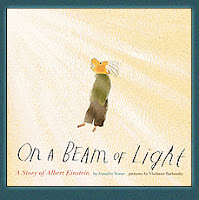 Across from my table was a writer I have always wanted to meet because she wrote one of my favorite books called Manfish about Jacques Cousteau. I use Jennifer Berne’s book when I talk about voice in nonfiction because she wrote it with the same breathy lyrical voice of Cousteau himself. When you read it out loud you unwittingly take on a French accent. Jennifer’s newest book, hot off the press, is On a Beam of Light about Albert Einstein, and it, too, is written in that same clean, spare, narrative that I aspire to.

By four o’clock I had sold more books than I bought, so, all in all, a good day.
Posted by Peggy T at 7:15 AM 1 comment: Links to this post


Spent the weekend at the National Science Teachers Conference, and talked with a room full (or not so full) of science teachers and those interested in using trade books in their science classrooms.  The session wasn’t as packed as it should have been, but the discussion was no less rigorous.  I met teachers from Missouri, Vermont, Wyoming, and other states who all struggle against time constraints, testing standards, and changing curriculum in their efforts to teach science as it should be taught – as an exciting exploration to satisfy curiosity about the world around us.

Catherine Thimmesh (author of Team Moon) wondered why students “check out” when a lesson or activity is labeled science. It didn’t make sense to any of us in the room – teachers or writers – who think that science in all its forms is cool.  Most kids start out being curious, natural scientists. Something along the way turns them off.  What can we do?

I’ve heard that kids don’t go into the sciences because they believe that it is hard.  Where does that idea come from? Yes, science can be difficult, but it is also one of the few places where being wrong can be just as important as being right.  Elizabeth Rusch (author of Mighty Mars Rover) noted that we need to model that it is okay not to understand something.  Our school system promotes right and wrong answers, facts for every subject. Sarah Campbell (author of Growing Patterns)  contends that if kids are taught how to think – analyze, compare, etc. -- science is just like everything else. “If you can do that, you can do science.”

I think Sallie Wolf (author of The Robin Makes a Laughing Sound) hit the nail on the head when she said, “We don’t have time in our education system to let kids stay in that place of not understanding.” There is always a test in two weeks, another unit to move on to. Kids also aren’t taught to trust their observations.

When a group of 5th graders created a bird field guide, they had to ask, “How can we make a boring Missouri bird sound cool” (They had just read about penguins and thought they were cool.)  That’s what NF writers ask every day. What other questions do we ask?  How do you make something complex simple?  What’s important to kids?  If you don’t understand, how do you find out – what questions do you ask?  What are your assumptions? How do you know what you think you know?

If we want kids to ask questions, we can’t be afraid to not know the answer. Teachers, writers and everyone need to admit, “I don’t know, but let’s find out.”  And we writers can acknowledge how much we don’t know when we start a project, how that it’s exciting to us, and how we go about getting the information we need. If we are honest with kids about not knowing, perhaps they will be more comfortable with that part of learning and science won’t seem so hard.
Posted by Peggy T at 5:18 PM No comments: Links to this post

Walking in Their Footsteps 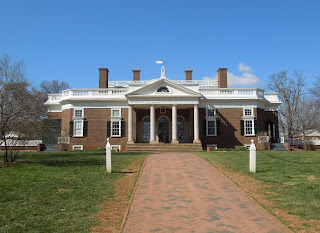 The best way to capture the past is to step back into it -- visiting the places you are writing about. Last week Fran and I toured Monticello, the mountaintop home of Thomas Jefferson.  There is no better way to get into a person's head than to walk the red Piedmont soil and marvel at the blue rolling hills off in the distance. Now I know why he called it his "sea view."

But stepping back in time also takes a healthy dose of imagination, too. Mulberry row, where slaves lived and worked, is empty now. I have to imagine the lane busy with boys making nails, and the air  thick with smoke from the forge and the cook house. Instead of the two white women driving a four-wheeler from tree to tree in the orchard, I have to envision perhaps two black men carrying a ladder and saws to trim the branches. 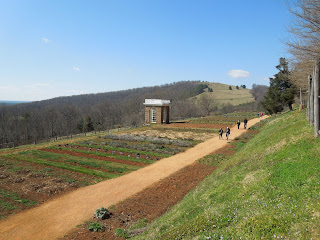 The past is not black and white, either. Old photos make everyone look somber and give the impression that history was fuzzy and dull. But people wore shades of red and blue, laughed and danced.  One of the more startling things I noticed at Monticello was the neon yellow dining room. Not what I would have expected had I not known how much he appreciated light and air.

Hustled through the house with other tourists it was hard to really see everything, but then again, it gave me a more accurate portrayal of a house filled with children, servants, and family.  And when I return, I can dig deeper, look closer, and reveal even more. 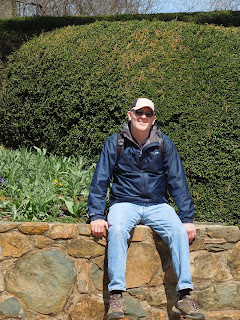 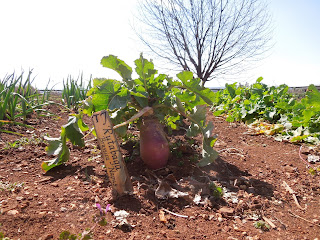 Posted by Peggy T at 3:00 AM No comments: Links to this post